Am I Too Old For This Dog?

That was the question posed to me by a client I saw a few weeks ago.  Her kids told her she was too old to get a puppy (she got the pup anyway!), and then they told her she was certainly too old for an adolescent dog when she began having a few issues with him, and that's when she started to doubt herself and called me. My client is 72 years young and told me she'd love it if I shared her story as she knows she's not alone.  Several of her senior friends told her their kids had said similar things to them, with some caving in and not getting a dog at all, while others opted for cats instead.  I'm grateful that she called me for help and for allowing me to share her story here.

My client has had dogs her whole life.  She and her husband always had Shepherds when their kids were growing up, but when they rescued a Golden Retriever about 15 years ago, that became their new favorite breed.  My client lost that Golden right after her husband passed away.  She said that while she knew they were keeping each other company in Heaven, she was lonely here with her kids living out of the area.  She decided she wanted another Golden Retriever, this time opting to go through a breeder rather than rescue as she wanted a "mellow puppy" that would fit her lifestyle. The breeder picked an adorable, rolly-polly male puppy for my client; he was laid back, loved to cuddle, and had already been crated trained and was doing well with house training. My client picked him up in January and things had been going really well until last week.  Her puppy is now 6.5 months old and has seemingly entered adolescence; he chases the neighbor's cat, pulls on leash, started chewing on her dining room chairs, and barks when people walk past their condo.  She hadn't felt overwhelmed up until this point, but now felt like she was in over her head.

First of all, I was a bit perturbed that her kids would tell her that she was too old for another dog.  What does that even mean?  My client is an active, vibrant, funny and fun-loving senior who lives on her own in a condominium in a big senior development. She is certainly not a novice dog owner and she's had puppies before.  Second, the breeder she worked with felt as I do that placing a puppy in a home is about finding the right home.  The breeder felt this puppy was a perfect match for my client as his easy-going temperament made him a better fit for her quiet lifestyle than if he had been placed in a busy home with kids, for example, where he might have been overwhelmed. So, while her kids were telling her "I told you so" when he began to behave as most adolescent dogs do, she called her veterinarian for help and that's when I entered the picture.

The issues my client is having are common and easily addressed.  By adding in an experienced dog walker, we've been able to increase the dog's physical exercise. We added in a flirt pole at home for exercise in my client's little backyard, and we picked several interactive toys to use for feeding him meals and keeping his brain stimulated.  We switched out his plethora of soft toys for a handful of stuffed sterile bones, bullysticks, and Nylabones to redirect him from chewing on the furniture when he's bored.  All the toys are picked up now and in a cupboard and my client is switching them out several times during the day to hold her dog's interest.  We've instituted time outs for not listening to the quiet command and put up motion-activated sprinklers in her yard to keep the neighbor's cat out of her garden and thus keep her dog from chasing the cat too! This client loves to learn, so we decided she'd enroll her dog in an upcoming Rally class for fun.  I've started her training for the class already, using soccer cones at home and printed directions for different stations.  Her dog is loving all the new challenges and my client is feeling accomplished and like she took an active part in changing her dog's behavior before it felt like it was too late.

I did a follow up phone call with my client yesterday to see how they were doing.  She sounded so upbeat and positive (not tearful as she was the first time we'd talked!) and she said she'd sent her kids video of herself and the dog doing Rally in her backyard!  She was proud that her dog was getting all sorts of positive comments from her neighbors and friends and she was relieved that her kids weren't pushing her to give the dog up.  I'm really proud of her and all that she's accomplished.  For me, she is an ideal dog owner, one with the experience to know when she should ask for help.

As always, if you have questions about your pet's behavior, you know where to find me. 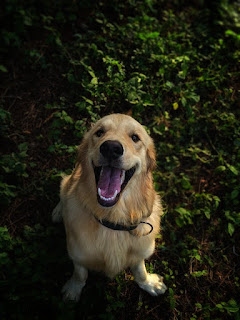 If you're happy and you know it, smile big for the camera!